There’s a story in the New York Times about my artist ancestor—Donatus Buongiorno—suing a famous stage actor, William Faversham, in 1908, for non-payment for a commissioned portrait painting.

At first glance, the story seems embarrassing. Titled “Faversham Sued By Volunteer Artist,” it suggests Buongiorno tried to con money out of a famous guy on a flimsy pretext of having been hired by him. But the news report isn’t the full story. Maybe Faversham tried to use his fame to wiggle out of a legitimate deal.

Read the story here and please join me in being appalled at the routine racism casually heaped on Italian immigrants in the yellow journalism of the period. In 1908, there were 40 or so English-language daily newspapers in New York City, and this type of inflammatory story was typical for spurring sales. Also note, this story pre-dates the purchase of the Times by the Ochs family who turned it into the legitimate newspaper it is today.

Further digging reveals this notice published a month later which shows Buongiorno won the case! He was awarded $29 plus an undisclosed amount for expenses. 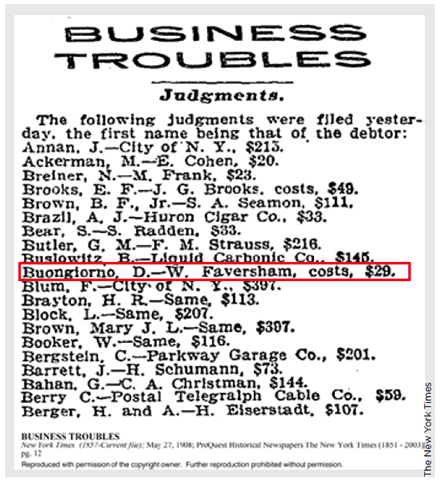 I researched the story to death 10 years ago and wrote up my findings which you can access in a downloadable PDF file here, but I never figured out what happened to the painting. The news stories don’t specify who ended up possessing it. Did Faversham accept delivery once he was forced to pay for it? If so, did he keep it or destroy it? I searched sales of his estate (bad at managing money, he died penniless, and his wife sold assets to pay debts) and found no life-size portraits among the items sold. Or did Buongiorno keep it? If so, did he sell it to someone else?

It recently turned up—in a house museum in Ponca City, Oklahoma: Marland’s Grand Home. A curator found me online and sent a note—“I found this painting in our attic that’s by your ancestor. It’s signed (that’s how she found donatusbuongiorno.com) and dated (1905.) Do you know anything about it?”

Here are the photos she sent. 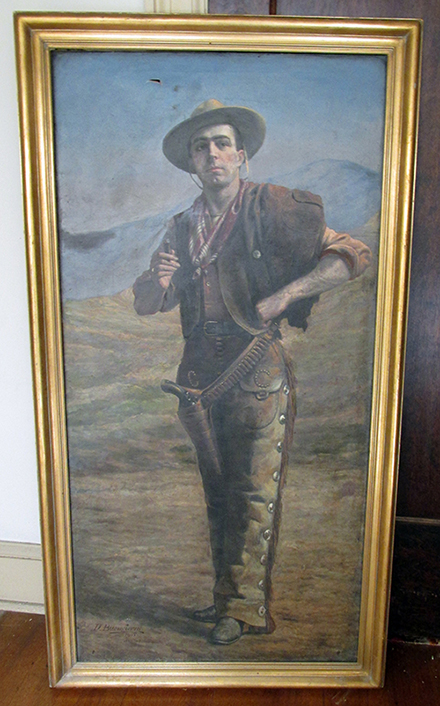 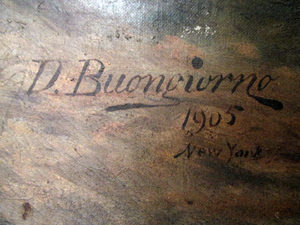 Me—“YESSSSS. I’ve been looking for that painting for 10 years! It’s a portrait of William Faversham, a British stage actor who became famous on the New York stage! Turn it over and see if there are any notes on the back—on the canvas, stretchers or frame.”

I knew that was the name of a show, and when I Googled that plus “William Faversham,” I found this vintage postcard which Buongiorno obviously worked from. (It was for sale, and the curator immediately bought it to keep with the painting!) 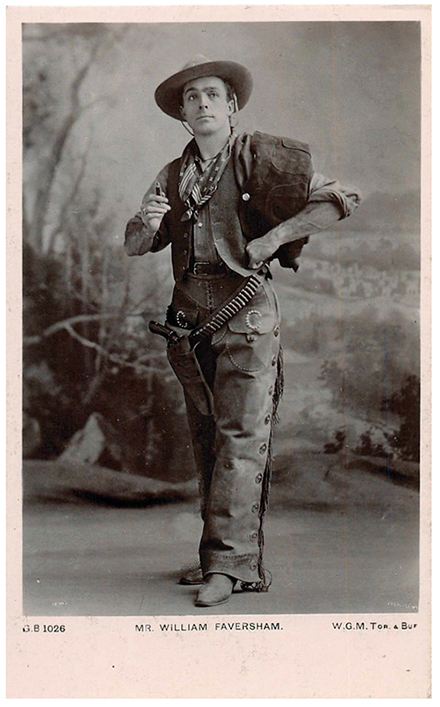 She had the painting cleaned and rehung in the museum. 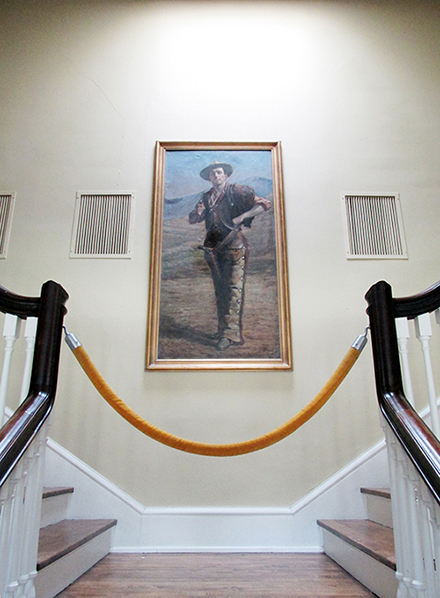 Here’s a link to her story at the house museum’s website.

Now we need to figure out how the painting got from New York to Oklahoma….

Previous Story: Yo, people, listen up.
Next Story: Shopping season: an eBay story.