Train from Rome: Notes for family members who are duplicating this trip in a few days.

There are two train companies that run trains from Rome to Naples. One costs 12 euros and is the “local”. Takes 3 hours, stops at 8 or so towns along the way, including several outlying areas of Naples that we were told are known for drug dealing where dealers and beggars get on the train to transact business and harass passengers. We were told that the trains are old, crappy, not maintained inside, broken seats and you might not get a seat and have to stand the whole way.

We saw the interior of one of these trains as we were leaving the platform in Naples, and it looked no worse than your typical NJTransit or LIRR train to me.

Side note: There is a palpable prejudice against “southerners” in this country. Every single Roman who gave us “advice” about Naples railed on and on about how frightening everything would be. Plus, I am writing this a day later and have spent a whole day walking around the city already. No problems! I think the nasty reports are exaggerated. Yes, we saw a few beggars. No, they were not that aggressive.

The other company is Italotreno.it. Costs 40 euro and is worth it. Takes 1 hr 10 mins, stops once, is a fast, smooth, pleasant ride. I recommend it highly. Brand new tracks, even the gravel they are set in looks clean. For those of us who only know train travel on 100+ year old tracks of the northeast corridor of the U.S., this is a revelation. I watched the train cross two lines at a switch at one point, and you could only barely feel the bump from within the car. I especially encourage Dave H the engineer to choose this option for the “infrastructure experience.”

Plus, we went through, and got glimpses of, this exciting, spectacular, new Napoli Afragola station by architect Zaha Hadid!!!

You can book at their website (assigned seats), but it’s not a smooth interface and took us an hour. Honestly, I think we could have done as well just showing up 20 mins early and buying the seats at the station. We traveled at noon on a weekday and the train was full but not completely sold out. Both stations have segregated spots for buying tix that are less busy than the general station and out of traffic, so you don’t feel nervous handling your cash, credit card, etc.

Speaking of which, no problem using American credit cards to buy stuff so far. Even the tabacchi stands take cards for bus tickets—1,50 in Rome, 1,10 in Naples. (Everything is cheaper in Naples, sometimes by half. Wait ’til you get to Naples to buy routine stuff, if you can.) Last night I used a credit card in a small, family owned restaurant—though I had to go to the “special” cashier to do it which was an amusing adventure.

Both railroad stations — Roma Termini and Napoli Central — are big, busy, typical major city stations and NOT the crime-infested dens of thieves that many report. They are certainly not “relaxing” spaces, never are, but neither did we feel especially besieged or threatened—and we were three typical looking tourists with the screaming clue of dragging wheeled bags. Both stations had visible security, European-style: camo uniforms, machine guns. Architecturally, both are well-designed and interesting. Also completely modern and logically functional (enter building, pass through a “court” containing ticket selling and food, continue straight ahead to tracks and platforms—which are called “binario” in Italian), unlike, say Penn Station in New York which is a compromised horrible mess of urban non-planning. In Rome, you can show your ticket for admission to a segregated waiting area along the heads of the train tracks, which is less busy than the main concourse.

Apartment in Naples: We walked from the station to the apartment in Napoli, which was easy, took 15 mins. I’ll draw a detailed map and send it to everybody, as the nest of streets immediately around the apartment building isn’t the clearest, but also isn’t “bad.”

The apartment is in a batch of buildings that look 1960s era, my guess. From outside, they are ugly. Plain surfaces, not “tidy” looking maintenance, but functional. Also, as in many European cities (especially in hot climates), a/c and sometimes also electrical hearing units are installed on the outsides of buildings, plus all kinds of other crap, such as clothes lines, antennas, meters, etc. (see photo), that make the buildings look like hell, in my opinion (I do care about aesthetics, mind), but they’re not as lower class as my American judgment assumes. Inside: tiles and marble surfaces, neat, clean, no problems.

Our apartment is huge, by city standards. The rooms are bigger than they look at the booking website. Everything is clean and works. I’ve seen worse plumbing and more dysfunctional appliances in many, many places I have stayed (and lived).

There’s not much of a view. The building is surrounded by other hideously ugly buildings, but you can see the weather and get some light. (Unlike, for example, the hotel I just left in Rome, where I had a closet-sized room facing an interior “court”—air shaft—where I couldn’t do either.) My travel guest reports that you can see Vesuvio from our balcony (which adjoins two of the three bedrooms), but I haven’t been out there yet.

You don’t have to “hide” that you’re moving in. We waited in the lobby area of the building for the owner’s rep to arrive to let us in. It was her secretary: Valeria. Vittoria is a lawyer and has an office somewhere nearby. We didn’t meet her. The doorman/guard called Valeria for me (meaning, he knew that the apartment was rented to transients and he knew the lawyer’s office phone number.) Other residents said “Buongiorno” to us while we loitered in their lobby. (If it were NYC, people would quiz you and/or call the cops.) It doesn’t seem to be a secret that there are transients in this unit, nor does anyone seem to care. 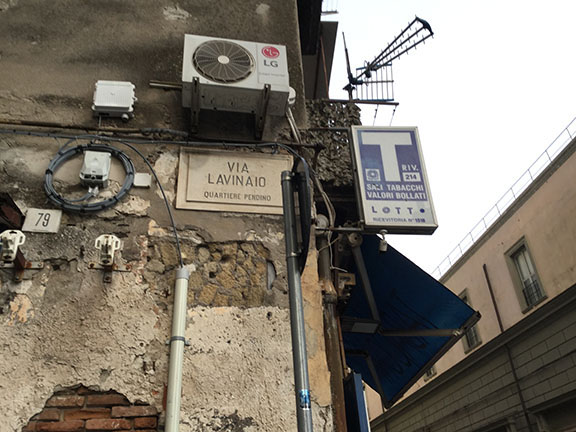