Sometimes serendipity pays off in the most amazing ways.

In the course of preparing for our trip, in September of 2018, I sent an email to a Carapellucci in the U.S. who is from a different family than mine (though his grandparents were from another Abruzzese town not far from Caramanico), with whom I compared genealogy notes 10 years ago. His name is Dan, and he’s a gregarious sort, so in the throes of frustration over Italians not replying to my emails, one night I thought, “I’ll write to Dan, because he’ll reply.” I sent him a cheeky “Heh, we’re going to Caramanico in a few weeks, need photos of anything?” figuring we’d have a nice chuckle.

It bounced back: dead email address, but I don’t give up easily, so I guessed at a few “generic” possibilities, e.g. d.carapellucci@gmail.com and other similars, and sent it again. A David Carapellucci in Canada forwarded it to his mother, Vilma Carapellucci, who replied. She is actually Vilma Ricci married to Gino Carapellucci, and guess what? Vilma and Gino are both Italian-born, from Caramanico, migrated to Canada in the 1970s, Vilma speaks Italian and works at the Italian Consulate of their Canadian city. I hit the jackpot!

Though we couldn’t figure out how we (the Carapellucci of Schenectady, New York) were related to her husband Gino, Vilma looked at our 100-year old birth and marriage documents and gave us some information on churches, locations, etc., and set us up with some people to help us in her hometown while we were there.

First day back in the U.S. from our trip, I heard from Vilma.

Hello Janice
How was your visit to Caramanico?
Haven’t heard and was wondering what you were able to discover.
Vilma

The trip was great. Caramanico Terme was lovelier than we ever anticipated. We expected a poor, rundown place that was trying to hang on with an invented “spa” industry.

It was like a Rocky Mountains ski town, my sister Loraine said. Meaning: there’s a main event (skiing in the Rockies, spa treatments in Caramanico Terme) plus, for affluent people who need something to do between their main events, there are ancillary services (restaurants, brew pubs, pastry shops) and upscale shopping (clothes, housewares, collectibles). And I thought Americans were the only people who eat and shop as recreation.

We found all the churches we sought, but we had a hard time searching out the home addresses that are on our various vital records: Via San Tommaso 31, Via Fonte Santa Croce 31 and Via Scagnano 31.

And wow, people were so friendly and helpful, even those who had no information to be helpful with—but wanted to talk at us in Italian for an hour or two anyway.

First, we had advice from Davide Cristofaro who owns the Hotel Arimannia where we stayed. (Beautiful place, by the way, recommended to all.) It was useful, but he dismissed the notions of visiting Scagnano and San Tommaso, because, you know, frazione, peasant villages with none of the appeal of the thriving metropolis of Caramanico (population 2,000).

Sorry bro’, that’s where our people are from; we’re going there. 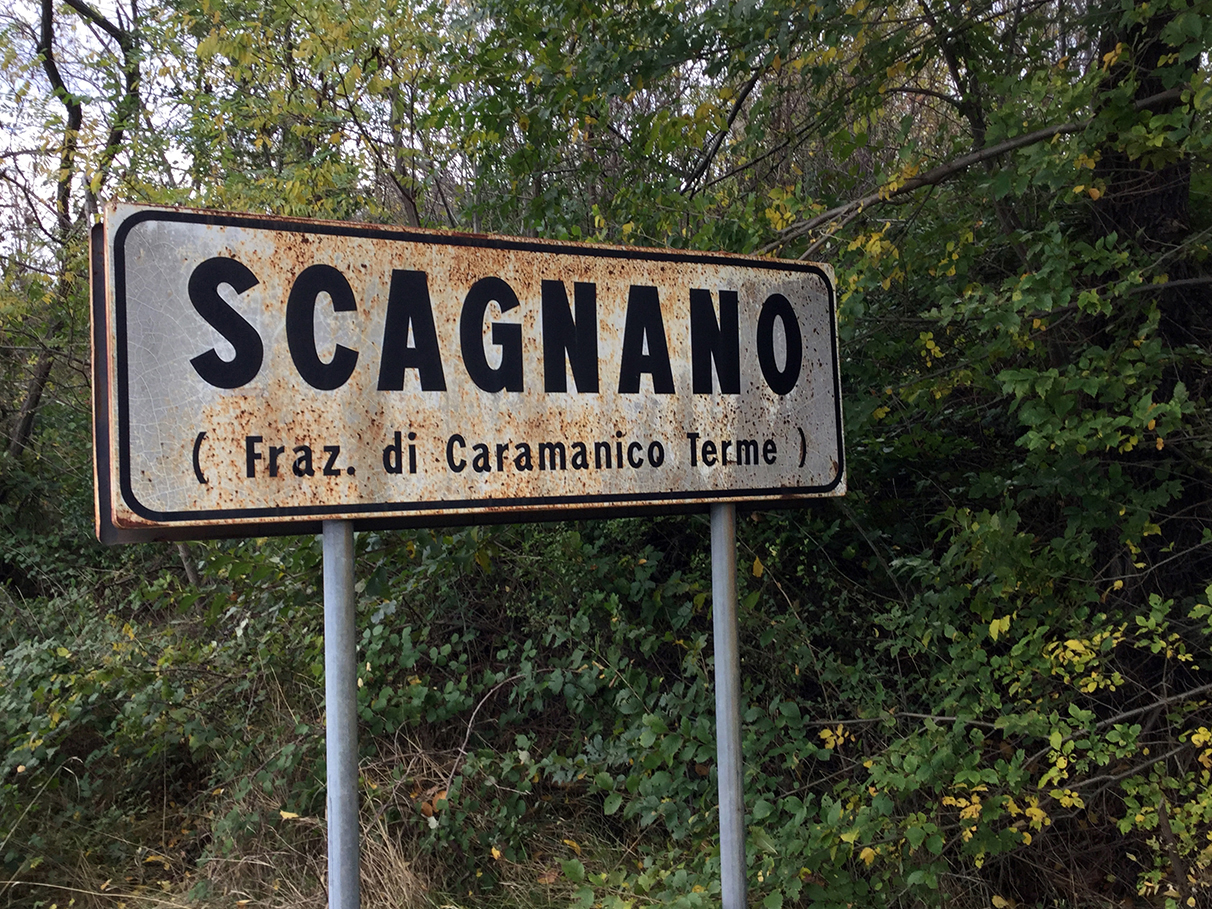 We drove around the two frazione and tried to figure out which houses were old and how the numbering system works. It was obvious that the stone, unearthquake-proofed buildings are the old ones and that most, being unsafe to live in, have been abandoned or are used as garages by people who have built newer houses nearby on their own land. None of the old buildings still had numbers on them. Sometimes they were between, or slightly behind, the newer houses, so we tried to guess: Is that number 31, if the new house in front of it is 29? 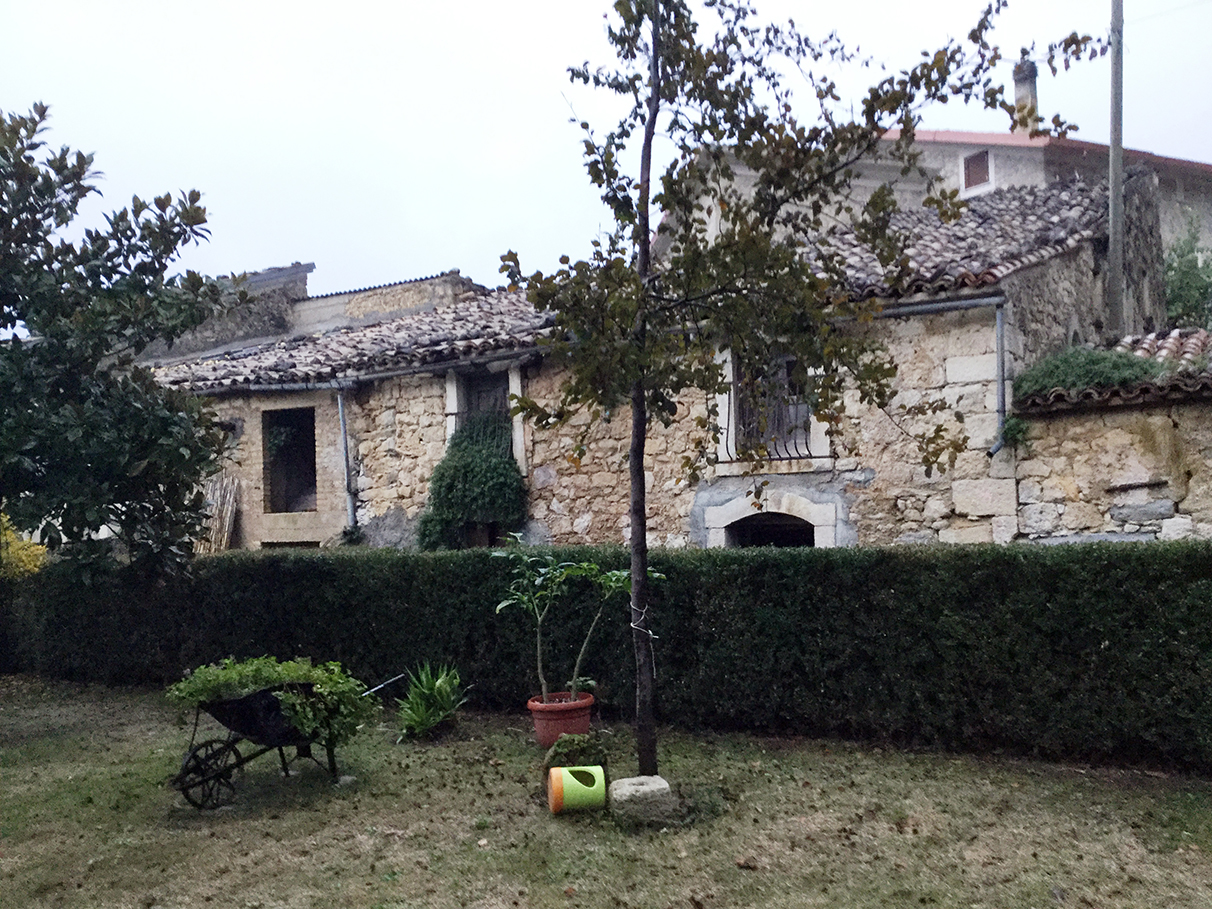 But the numbers aren’t consecutive on the streets, nor do they follow the American system of odd numbers on one side of the street, evens on the other side. The numbers don’t even go in the same direction on both sides of the street. Whew.

In Scagnano, there was a woman outside her house, so we introduced ourselves and she, Diana, knocked on the door of an elderly neighbor: “Do you know anything to help these people? They are Carapellucci and Marinucci (our great-grandmother’s maiden name).” Nothing. Then we visited another neighbor who told Diana, “Davide called me yesterday,” and she had nothing. (She was too young.)

Then Diana thought, “They need to talk to Angelina and Gino.” She got in her car and commanded we follow her to their houses, where Angelina invited us in for cookies. (Pizelle! Oh my God, we love those cookies!!!)

Angelina yells upstairs to wake her cousin Gino (who, we figured out later, lives in an adjoining house), who starts puzzling over our documents and talking/arguing with Angelina about this and that. They were both Marinucci, but Angelina’s maiden name is Carapellucci, so the plot had thickened. 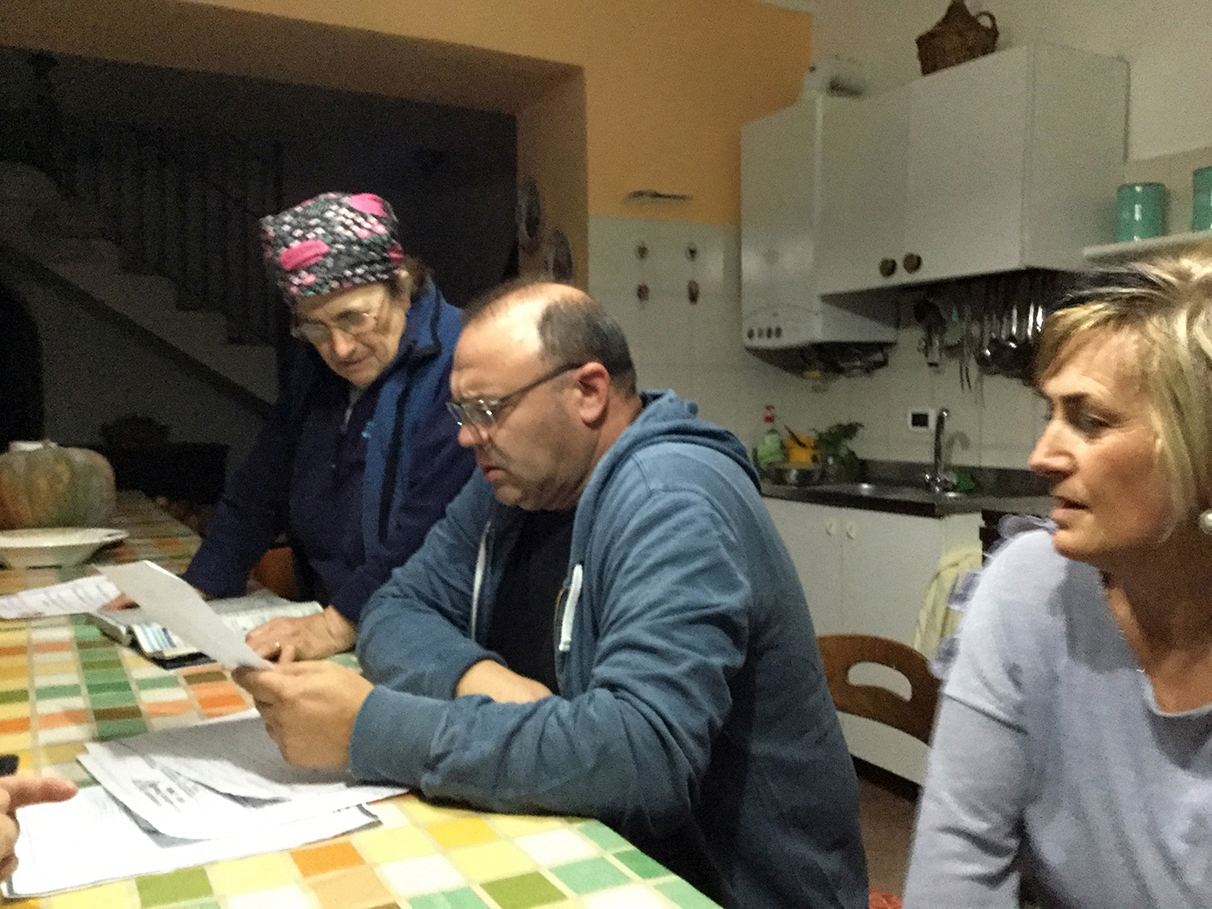 We piece together that our Carapellucci people started in Caramanico, but our great-grandfather, Antonio Carapellucci, moved to Scagnano, presumably when he married Anna Marinucci in 1877—maybe to acquire land from her family? (We think they must have had something to sell in Caramanico and/or Scagnano before they left in 1907, as they bought a farm in the U.S. only a few years later. Where did they get the money?)

After about a half hour of the two of them puzzling over the documents (Diana left in the meantime), my sister Loraine whispers to me “I think these are Vilma’s people.” 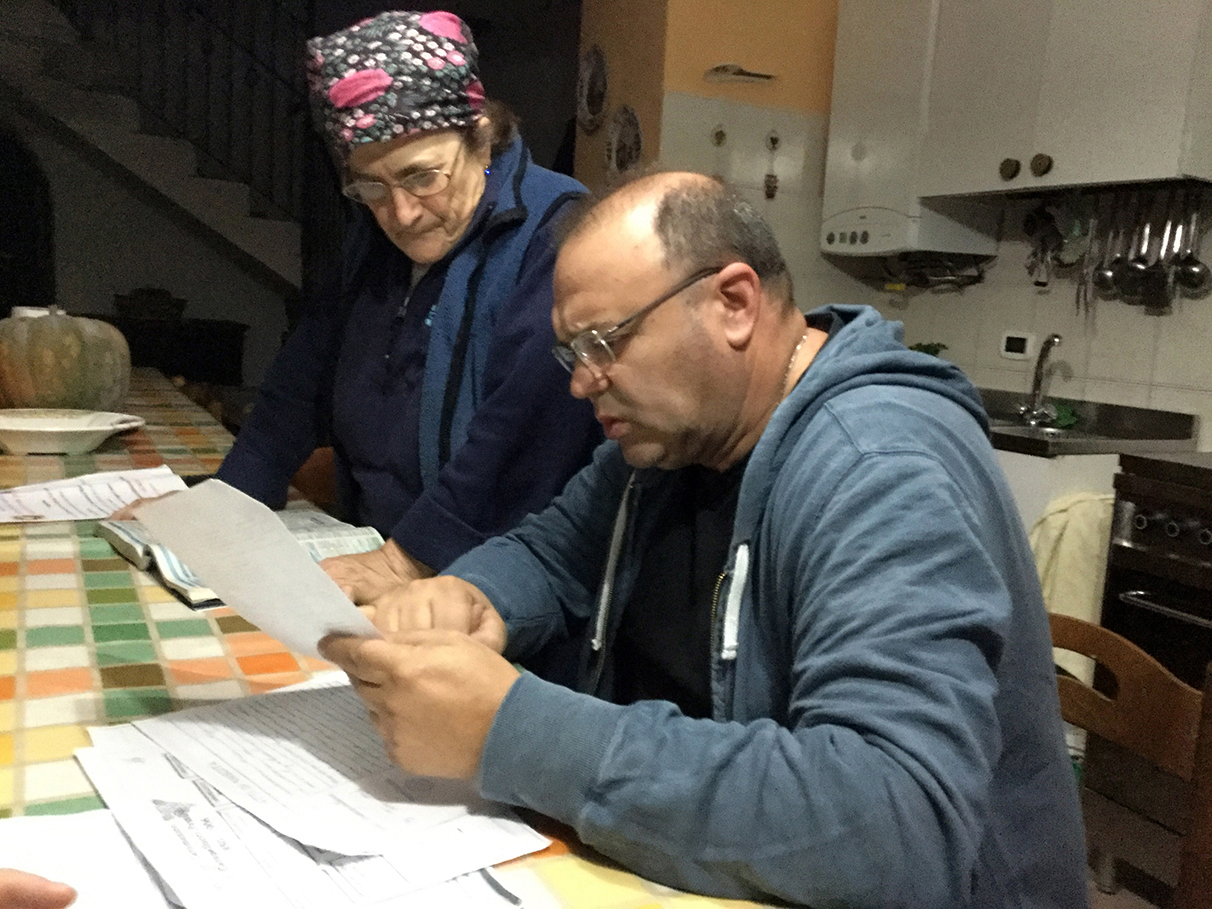 So now we’re looking at each other (3 of us: me, Loraine, Loraine’s husband) like “How the hell do we get out of this woman’s kitchen so we can go eat dinner?” (We were hungry.)

Then we asked Gino something about “Via Scagnano” and he comes out with “All the streets in a frazione have the same name—the name of the frazione.”

Huh? So all the streets, even if there are 4 or 5 of them, are named “Via Scagnano?”

That’s it. We’re wasting our time. The address of the restaurant we found on Google Earth years ago, which we were counting on using as our reference point (Tana del Lupo; Contrada Scagnano 19), is irrelevant, and we’ll never know which house on which street was number 31 in 1907. Let’s go.

Then Gino says, “And they re-number the houses periodically.”

Gino: “Every ten years or so.”

Oh my God this is really pointless!

But by then they had called Elvira Carapellucci, 80-something woman with dementia, and insisted we visit her to see what she knows.

Back into the cars, Angelina rides with us and directs us to Elvira’s house.

Elvira’s attendants ask her questions and she has nothing for us, so we make our exit graciously, drive Angelina back to her house, resist her entreaties to come back tomorrow for spaghetti (she had given us a demo of pasta making earlier when we were in her kitchen), and make our retreat.

I’m not complaining, Vilma. It was fun. Your relatives were all soooooo nice. They really, really wanted to be able to help.

And it was such a pleasure to listen to people who knew how to pronounce “Carapellucci” and “Marinucci” smoothly and without pausing, because we’ve lived our whole lives (in the U.S.) hearing stumbled syllables followed by “Is that an Eyetalian name?” (To which I now reply, by the way, “It is, but it has also been an American name since my grandfather naturalized in 1918, and it’s time for you to learn how to pronounce it.”)

And Gino did answer our questions, finally, even if it inadvertently!

We also thoroughly enjoyed the drives through the mountains approaching and leaving Caramanico (we entered on the roads from the south and left via the north), and we understood our American ancestors much better after seeing how much that part of Abruzzo looks like the Adirondack mountains in New York State where they settled: deciduous trees with autumn-colored leaves! I’ve never seen that elsewhere in Italy.

Even standing in Elvira’s driveway: out in the “country” away from the lights of the big city of Caramanico, we enjoyed looking at the stars in the totally black sky, which is something we never see on the east coast of the U.S. (because it is so populated).

The landscape of Abruzzo is unique and especially beautiful. I can understand why you, or anyone who is from there, would feel possessively proud of it. You have very good reasons. We’re thinking we might even return one day to hike in those glorious mountains.

Thanks for ALL your help, it was major.

Send me pics of your next trip. Now that we will recognize places, it would be really fun for us to look at someone else’s vacation photos from there!

Janice adds:
Ps to Dan: if you ever see this post, send me an email from your new address, dammit—I’ve got photos to show you!

Epilogue: The next day, Loraine, who had clearly been cogitating on this all night, figured out that “our” #31 house is one of the old “garages” in front of Gino and Angelina’s houses. Our Marinucci—Anna—left so long ago (1907) that no one remembers her anymore, but Loraine thinks that because she was a contemporary of those witnesses, from whom Gino and Angelina are probably descended, probably all three families lived in those shacks at the end of the driveway next to the two new houses where Gino and Angelina live now (not in photo.) Anna Marinucci and her husband—“our” Carapellucci (Antonio)—sold their shack to one of the other two Marinucci families and left town. Luckily, I had snapped a photo of the “garages” when we pulled in, just before the sun went down. Here it is—the three low roofs, only. (The tall building on the far left is a real house, inhabited by someone we didn’t meet.) 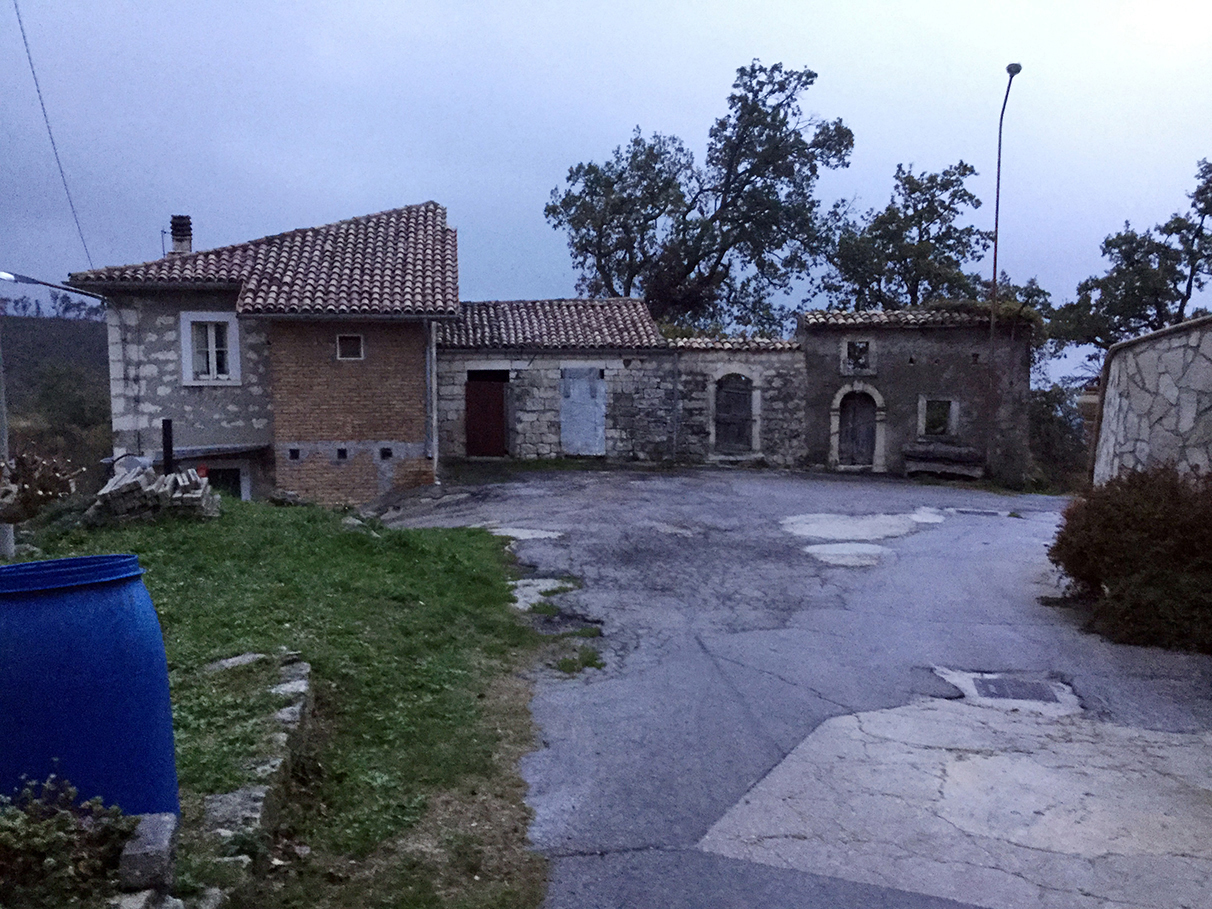 And there’s always Google Earth which has better lighting.

So that’s it, and we are owning it: Our grandfather, Emilio Carapellucci, was born in, and grew up in, one of these three shacks in Scagnano, Frazione of Comune of Caramanico (now Caramanico Terme). We found our roots, people!