First, Lucia showed us two books on the town’s history. Were they available to buy? No. No more in print, no extras in the office to sell.

So Loraine and I started photographing their pages, then Lucia interrupted us to tell us more information and to show us stuff on her computer. She would start to talk, then stop and type frantically on Google Translate instead. I loved the woman’s enthusiasm!

Loraine and I whipsawed between looking at Lucia’s computer, looking out the window at the church across the street, and photographing those unavailable books.

Lucia told us the story of the construction of the Collegiata di San Michele church, which astonished us.

The night before, we had learned from Alfonso Buongiorno how the tanning industry Solofra families started as conversos (former Jews) from Spain who migrated to Florence in the 1300s, which was the tanning center of Italy. At some point, they were invited by someone (a land baron) to move to Solofra to set up a competing industry.

Lucia explained that there had been an old church on the site of the Collegiata which the families deemed inadequate. In the early 1600s (which would be approximately 200 years after the converso families arrived in Solofra, so presumably the tanning business was profitable by then), they demolished the old church and built the Neapolitan Baroque building that exists today.

If we got the translating correct, Lucia told us the tanning families of the town pooled their money to build the church, and the chapels inside are named for them. They also hired the priest, who, besides directing spiritual life, functioned as the mayor (of sorts, this is before suffrage) and settled civil disputes. At one point, there was an argument over some matter and the priest defended the town instead of the government/crown. He was arrested, and the townspeople got him released.

“Collegiata”—collegiate—in the church’s name means it was also a school. There was a convent attached, and the nuns taught classes. Most astonishingly, girls attended as well as boys. Today, the school is, appropriately enough, the town’s public library.

And the church had one more role in town: bank. The founders of the church would deposit their money, and the church paid them interest. When they needed it, they could borrow it back, and then they would pay interest to the church.

This is an astonishing amount of power and autonomy centered in a non-governmental, non-royal institution. I’ve never heard of it anywhere in Italy, let alone in the south where the feudal system endured into the late 1800s. Has anyone else? Did we get the translating wrong?

When I told the story above to my friend Bill Russo in New York, I expressed it as, “They hired the priest, and he worked for them, not for the Vatican.” Bill blurted out, “That’s how a synagogue is organized!”

Is Solofra’s extraordinary history of progressiveness, self-reliance and agency a cultural legacy of its original families’ Jewish roots? Did the historic, formerly Jewish culture of this town create my ancestors’ can-do, optimistic personalities?

Looking out the window, Loraine remarked, “But what about the campanile (bell tower)? It looks different from the church.” 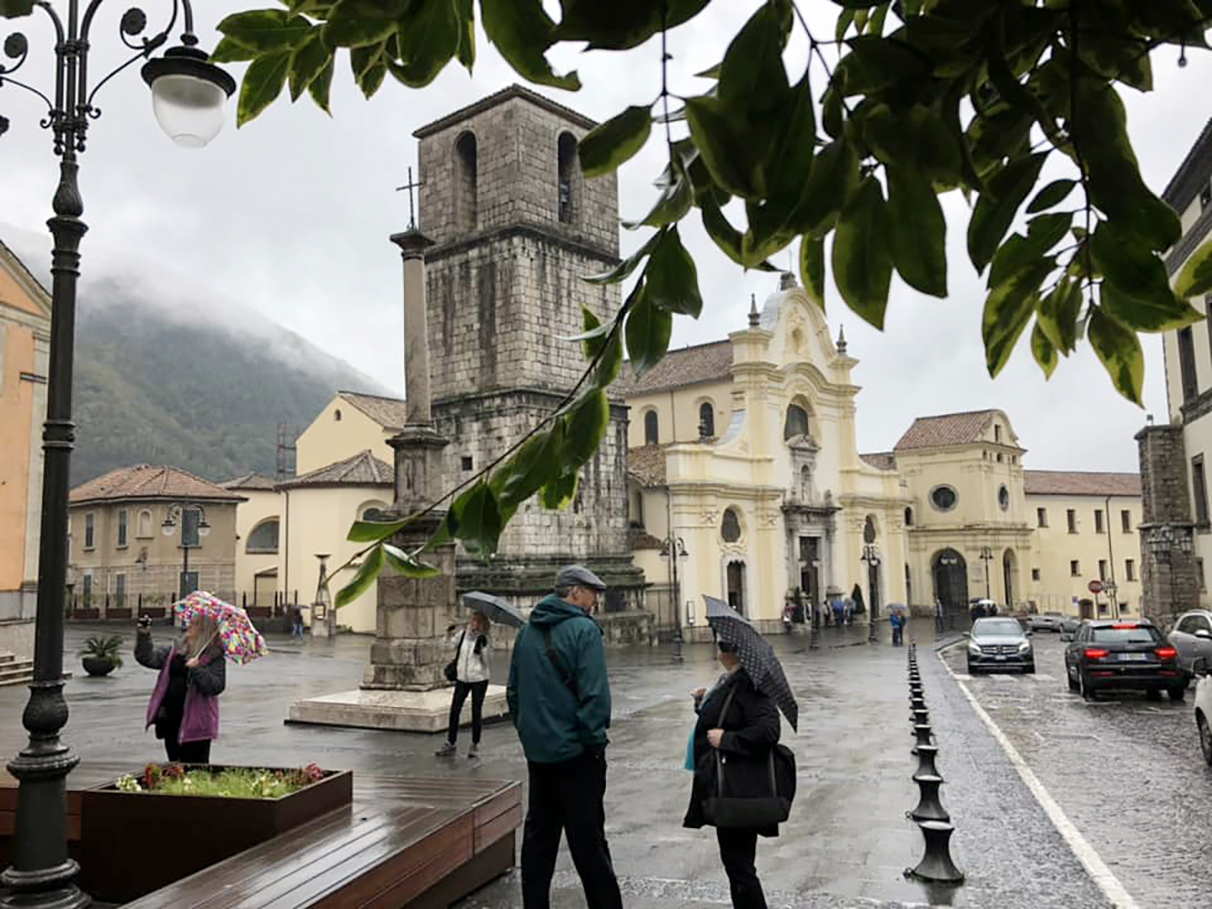 Lucia paused and placed her hand over her heart looking very pleased. Her reply: The campanile was built with the stones from the old church.

Loraine pointed out to me later that that question seemed to change the tenor of the whole afternoon. A switch flipped in Lucia’s head (and heart) regarding us: they get it. They care, and they are becoming involved in our history.

A few minutes later, when we were photographing the books again, Lucia came to the table, closed both books and pushed them across the table to us. “A gift. Please take.” We were speechless.

I hope she decided that those books were going to do more good for Solofra being on our desks in the U.S. than in a cabinet in her office, because Loraine and I aim to prove her right! We traded emails and plans to collaborate on future projects.

At one point, Mimma De Maio phoned in, so I finally got to talk to her in person and thank her for all of her work which I have been reading for years. She was my first “door” into the history of this town.

I suspect I am going to be involved with my grandfather’s family’s Italian hometown of Solofra, Avellino, for the rest of my life. And I am well pleased.

Previous Story: I’m a Jew
Next Story: Other returners.
Translate »