I wanted to go to Capri for one reason. To take a photo of i Faraglioni from the same angle as this painting by Donatus Buongiorno which I own. 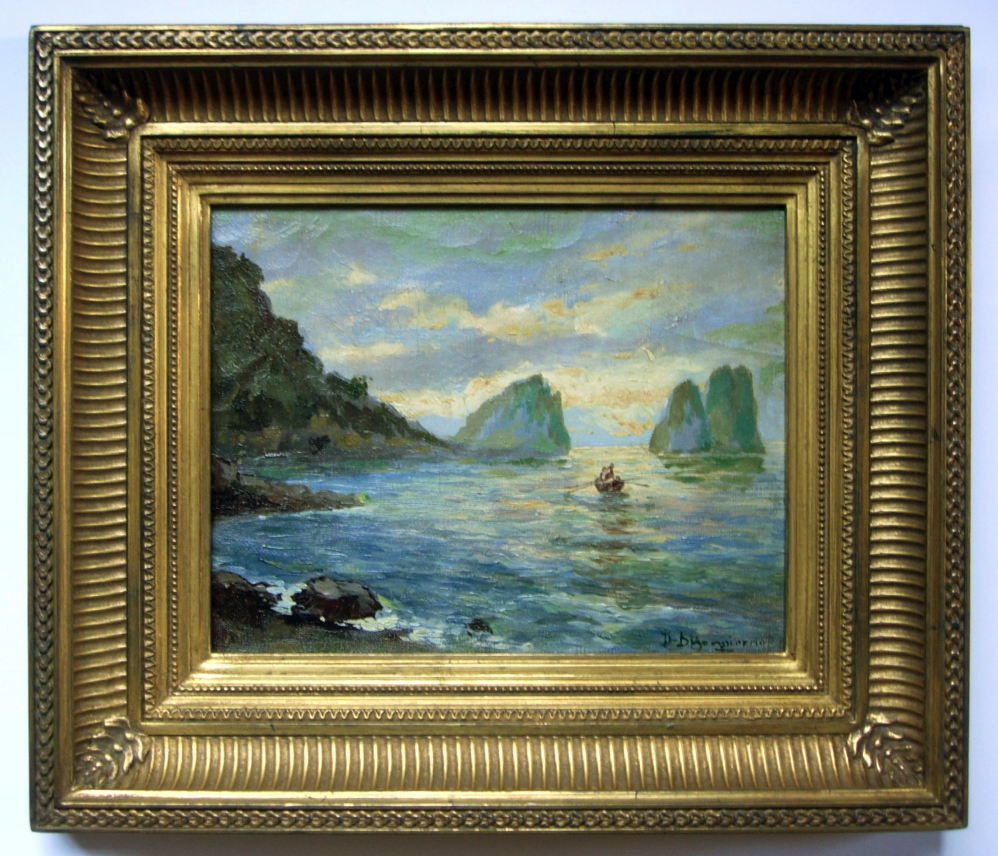 It’s an extremely well known site smack dab in the center of all things to do on Capri. How hard could it be?

My cousin Julie went a few hours earlier than I did, as her interests are not as singularly obsessive as mine, and there were other sites on the island she wanted to see. We set a time to meet at i Faraglioni.

As the ferry boat pulled out of the Naples harbor, I sentimentally enjoyed this view, re-creating in my mind my grandfather Domenic Troisi’s last view of Naples when he left on a steamship in 1907 to migrate to the U.S. Sigh. 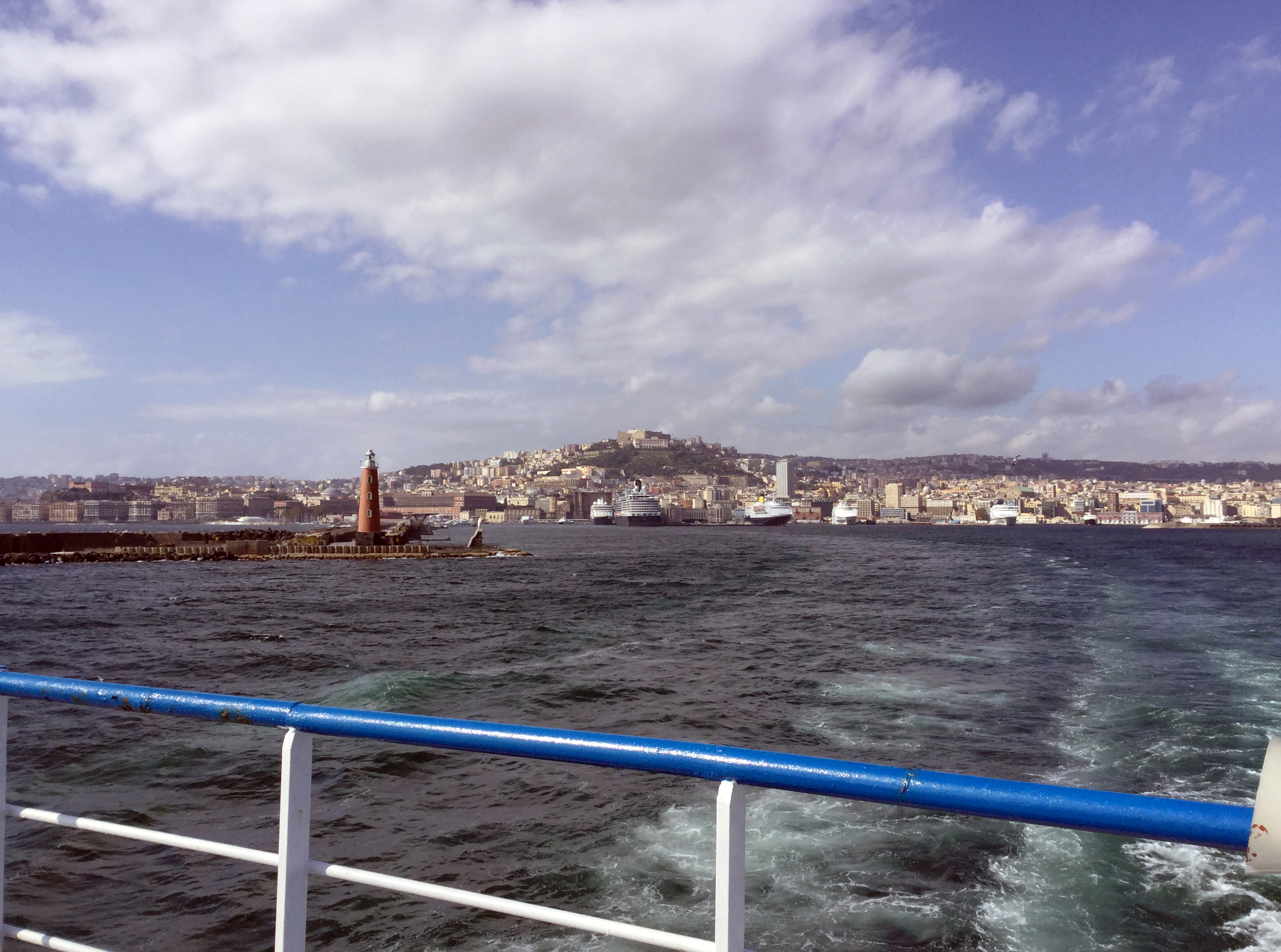 As always, Mount Vesuvius looms large over all things Neapolitano. 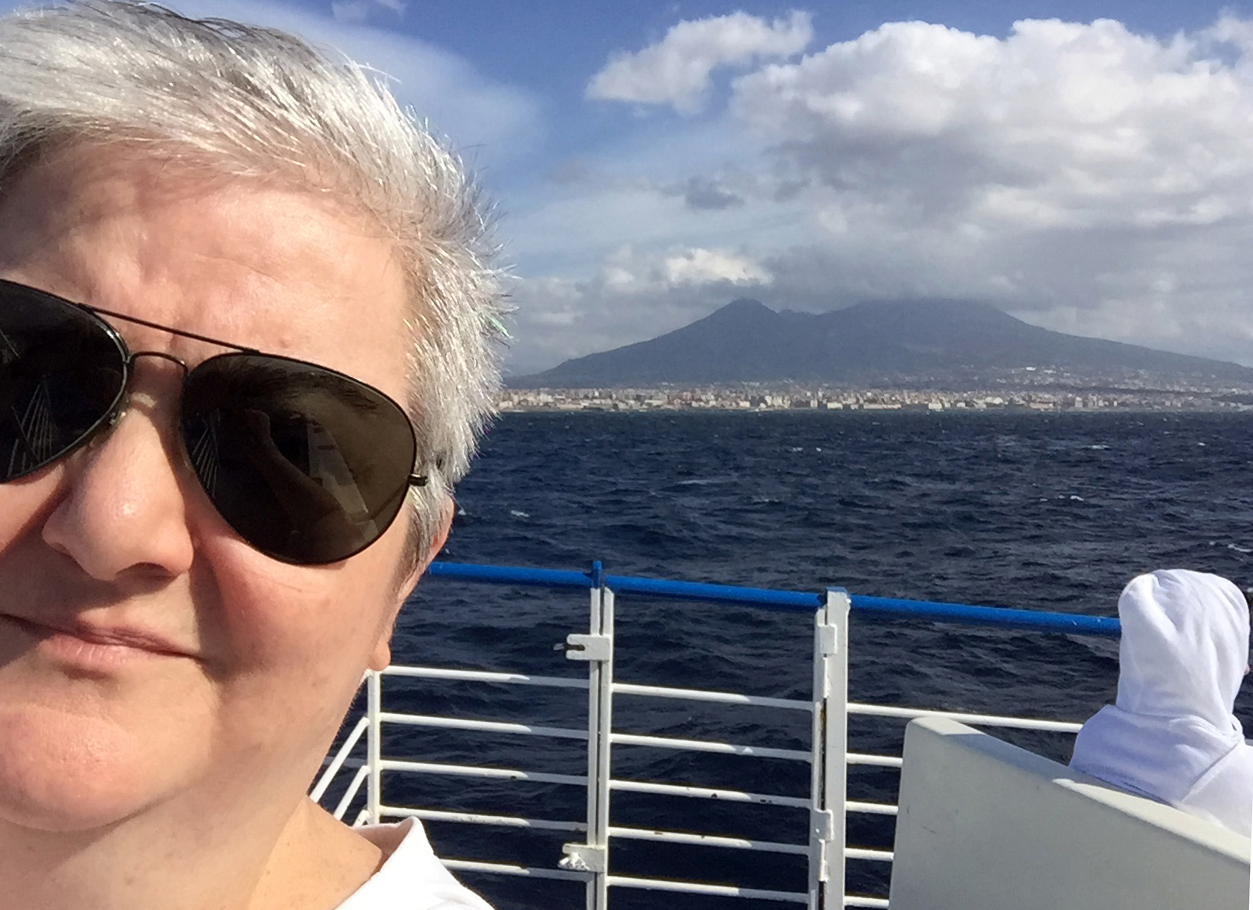 As the boat cleared the two breakwaters of the port, it started to heave substantially. I thought, “Hmm, choppier water than I would have expected. This a large boat to be thrown so much.”

1-1/2 seasick hours later, I debarked on Capri, paid a ripoff/captive-audience price of 10 euro for Dramamine (for the trip back), got advice from some Americans on where to find the funicular to the top of the hills, took it, walked through the “Rodeo Drive” of Capri (how the Americans described it)—luxury-store-only shopping streets at the top of the island which were really weird—to the gardens at the entrance to the Krupp Stairs one can use to walk down to sea level.

Turns out the stairs have been closed for 5 years. Why did no guide books say this? Umm, because my book is 10 years old, from when I first thought I was coming here. Oh.

Would I like to pay 1 euro to view the gardens only? (Yeah, alright, if it will get me into a toilet, too. It did.)

Julie and I were supposed to meet here, and we were both on time, but we figured out later, we must have been at different entrances, because we didn’t find each other.

So I viewed the gardens for 10 minutes and shot these photos. Do I sound bored? I’m a brat, right? Just look at these views!!! Then I hiked back up the hill to ride the funicular down the other side, figuring I would find Julie in the piazza where the ferry boats dock, knowing we would both end up there eventually. 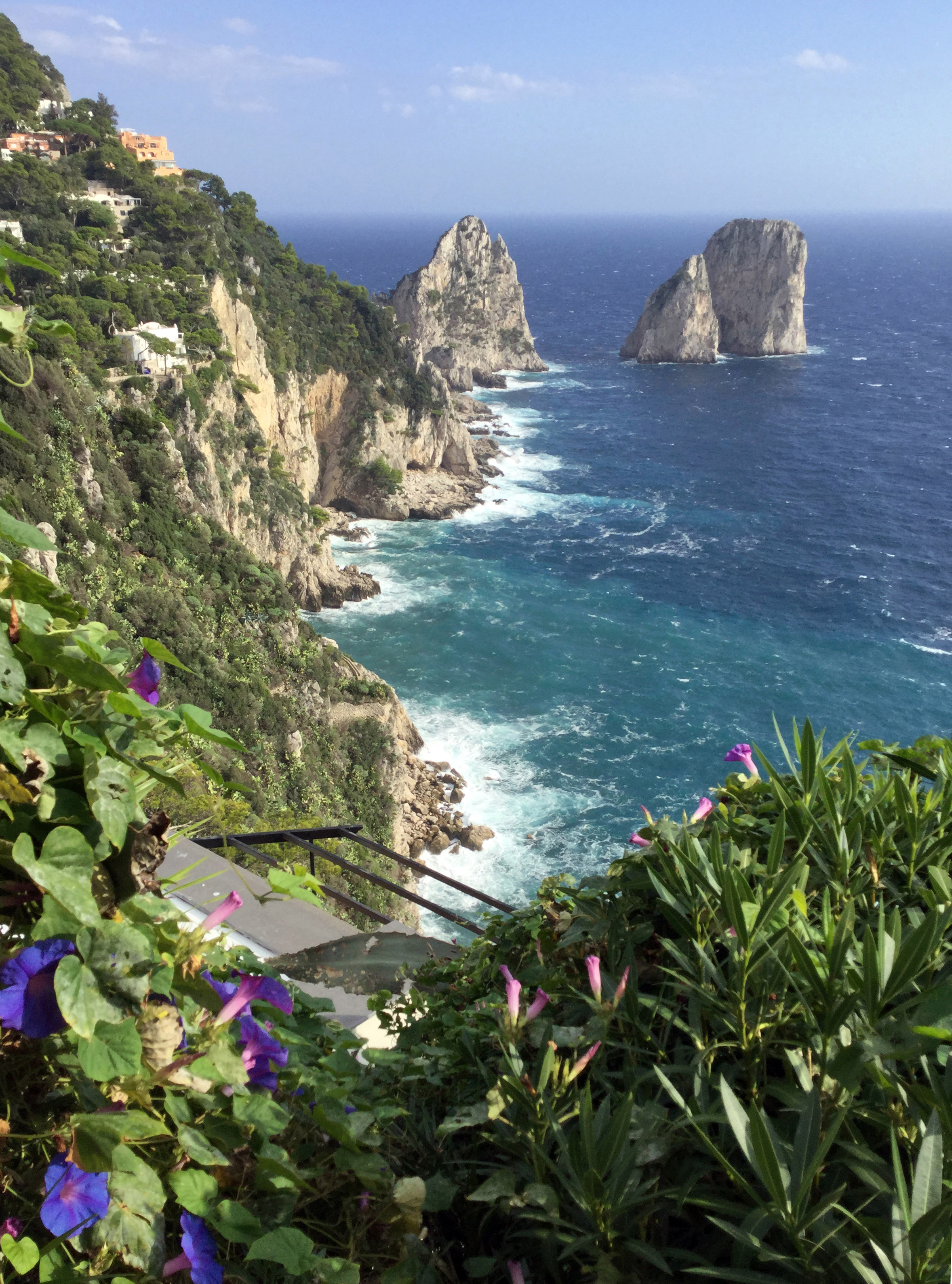 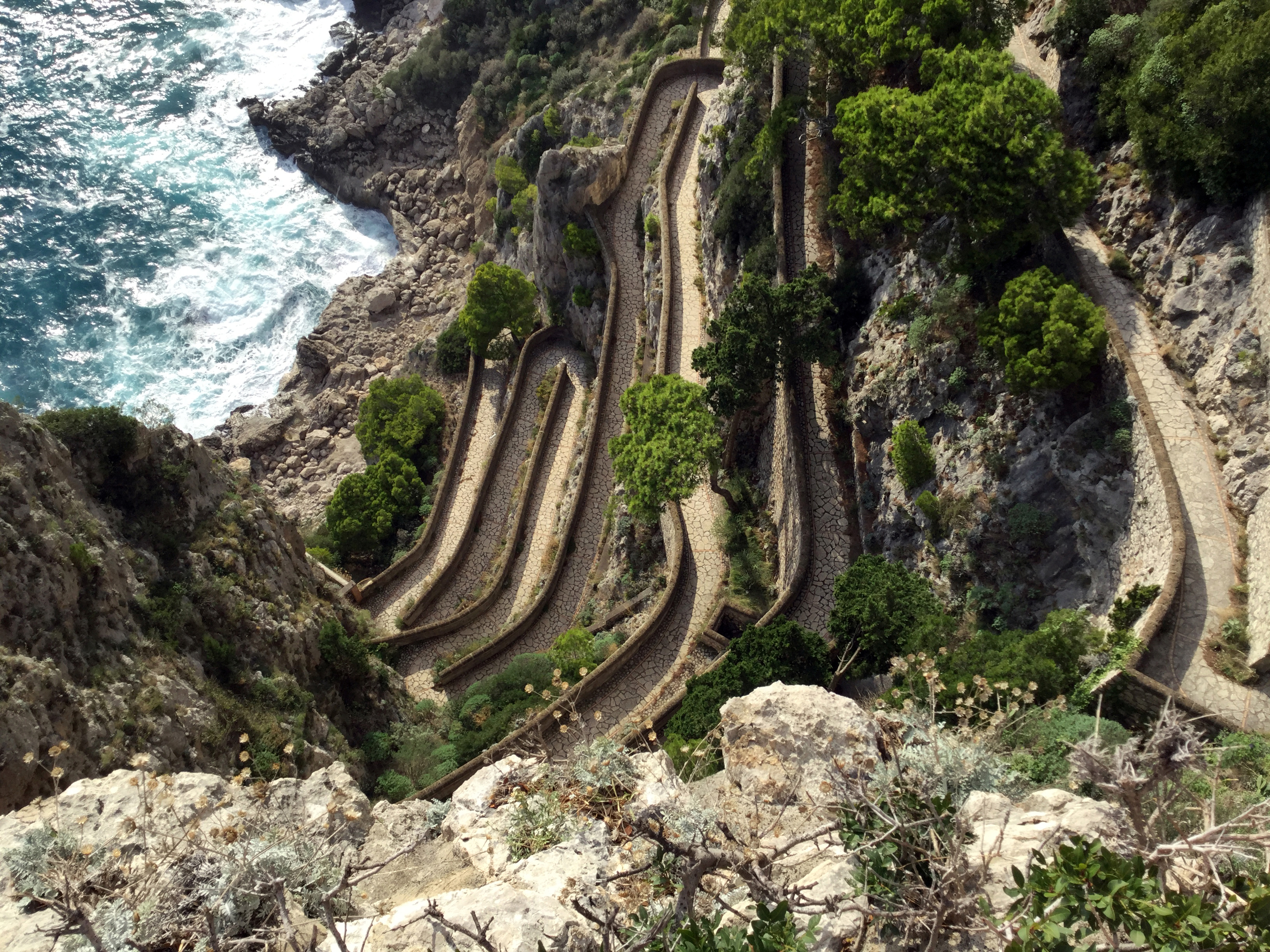 As I was poking around the ferry area, I figured, “Might as well buy my ticket.” I got to the window to see no available tickets to Naples until 12:30 a.m. Huh? Sold out on an off-season Saturday? But there was a boat to Sorrento where I knew I could get a train to Naples. It was in a few minutes, so I thought, “Sorry, Julie, I’m grabbing it.” (We’re both very experienced travelers and knew we didn’t need to worry about the other. Julie went through the same process about 1/2 hour behind me, and we met up at the apartment in Naples.)

I found out later that the ferries to Naples weren’t sold out, they were cancelled, due to high winds. It was a freak weather day, which explained that the choppy seas I experienced on the way to Capri weren’t typical.

The loud, boisterous, middle-aged French people on my ferry to Sorrento didn’t seem fazed. They were on a party tour, apparently. Here’s my proof: 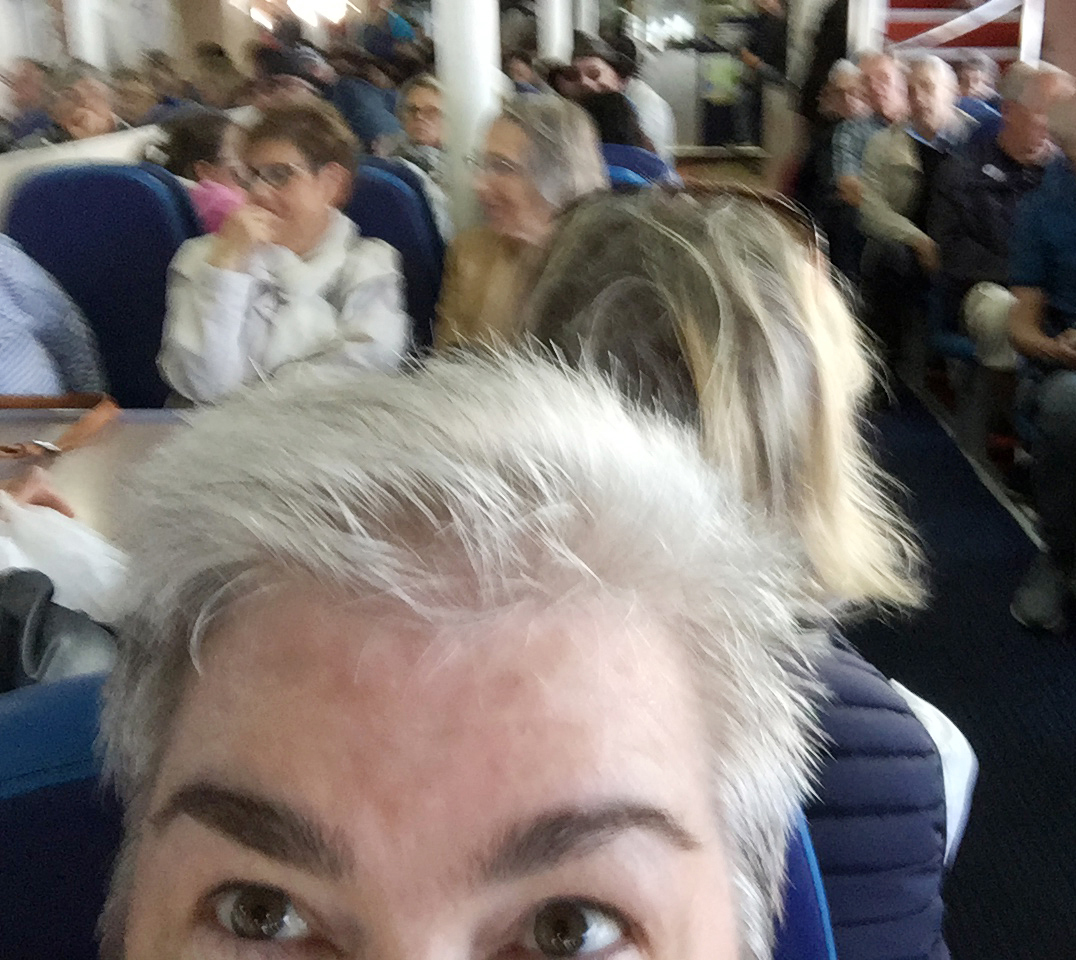 My cousin Julie, I concede, is a much more intrepid hiker than I am. Turns out she hiked down the cliffs by the pre-Krupp method—“stairs” and paths I can’t even imagine—and took photos for me at sea level, which she is generously sharing. Thank you, again, Julie, for covering one of my trip goals! 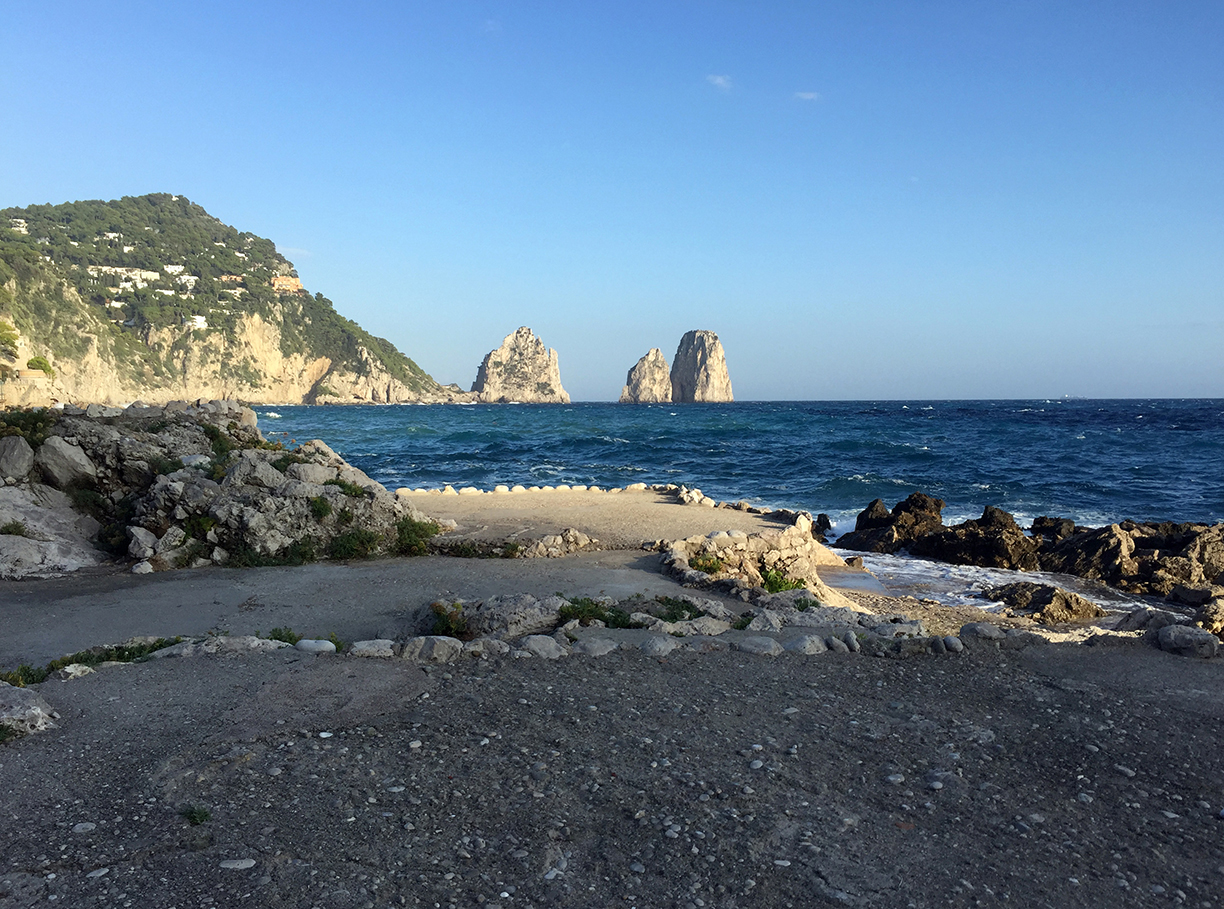 Here’s the painting again, for comparing.